This is an article about law in the United States. In July 2022 the Department of Justice said it will write new regulations next year about making certain websites accessible to disabled people. The DOJ announcement only applies to government websites. This includes public schools and public higher education colleges and universities. The DOJ tried to adopt regulations more than twelve years ago but did not. Will it happen this time? We don’t know. Lainey tries to be optimistic. It is hard to be confident that new regulations will happen, but regulations are very important for a digital world that works for everyone. 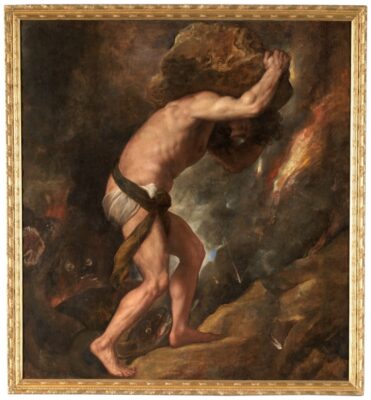 The ancient Greek story of Sisyphus tells of a doomed King sentenced forever to push a boulder uphill, only to witness it tumble down again just as he reaches the summit. The centuries-old story carries over to modern day English in the phrase “sisyphean task.” Dictionary.com defines such a task as one that is “seemingly endless and futile— you keep doing it but it never gets done.”

I’ve illustrated this article with a classic image of Sisyphus, painted in the 1500s and hanging in the Museo del Prado in Madrid Spain. (More on the image here.)

Because on July 27, 2022, the United States Department of Justice (DOJ) announced its intent to develop regulations about web accessibility for state and local government programs and entities covered by Title II of the Americans with Disabilities Act. (This includes websites of public schools and universities.)

I chose this picture as a warning. A call not to repeat the past. Despite a history of delayed web regulations, let’s get these regulations proposed and finalized. Let’s get them expanded to cover more than public sector websites. Let’s include the private sector.

Let’s be sure that adopting digital accessibility regulations in the United States is not in fact be a Sisyphean task. Even though I’m afraid it might be.

This article has the following sections:

Twice a year United States federal agencies are supposed to tell the public about their plans for the future. They share plans publicly in a document titled the Unified Agenda. The Spring 2022 Unified Agenda for the DOJ (published in July even though that’s Summer) is one paragraph long:

The Americans with Disabilities Act (ADA) states that: no qualified individual with a disability shall, by reason of such disability, be excluded from participation in or be denied the benefits of services, programs, or activities of a public entity, or be subjected to discrimination by any such entity 42 U.S.C. 12132. However, many websites from public entities (i.e., State and local governments) fail to incorporate or activate features that enable users with disabilities to access the public entity’s programs, activities, services, or information online.

The Department intends to publish a Notice of Proposed Rulemaking (NPRM) to amend its Title II ADA regulation to provide technical standards to assist public entities in complying with their existing obligations to make their websites accessible to individuals with disabilities.Spring 2022 DOJ Unified Agenda

According to the Unified Agenda, the DOJ plans to issue a Notice of Proposed Rule Making (NPRM) on the topic of public sector website accessibility in April 2023. If the agency meets this goal, the public will be able to submit comments through June, 2023.

What it doesn’t say

The July 2022 announcement also says nothing about technology other than websites; Technology that needs to be accessible if people with disabilities are to be included in today’s digital world.

There is no mention of mobile apps, kiosks, workplace software, or emerging tech like virtual reality that need access. Yet as far as I know nothing prevents the DOJ from including today’s technology in its NPRM about web accessibility.

For regulations to be current and future-proof they must be.

To me the most important part of the July 2022 announcement is the Department’s stated goal to help public entitles comply with existing obligations to make their websites accessible. No new obligations – just clarity and technical standards on what is required. Since the Web Content Accessibility Guidelines (WCAG) are the universally accepted standard and one that the DOJ itself uses and recommends, there is no reason for any public entity to wait for the regulations.

The DOJ has long required public sector websites to be accessible. In July 2015 I wrote about four settlements the Department negotiated about web access with counties across the US. (Those counties were in in North Carolina, Georgia, Illinois and Washington.) And the DOJ’s web access work with Title II entities goes back much further than that. (DOJ wrote its guidance titled Accessibility of State and Local Government Websites to People with Disabilities in 2003!)

I am an optimist. I write about the value of optimism (quoting Helen Keller) in my book, Structured Negotiation, a Winning Alternative to Lawsuits. There I call it “grounded optimism” — a belief that things will turn out well based on experiences and strategies that have lead to win-win results in the digital accessibility space for more than a quarter century.

Without optimism, it is too easy to give up on the collaboration and relationship-building essential to Structured Negotiation.

Because we’ve been here before. My experience with delayed regulations make optimism a challenge.

Earlier attempts (a decade+ ago) at web access regulations

On July 25, 2010, I shared the news that the US DOJ had just published “Advanced Notices of Proposed Rulemaking (ANPRM) on four issues of importance to the disability community,” one of which was web accessibility regulations for both public and private ADA-covered organizations. Three of the four regulations proposed that day (the day before the 20th anniversary of the ADA) were never finalized, despite the passage of 12 more ADA anniversaries.

My 2010 article linked to the DOJ’s government filing which stated (twelve years ago) that:

The Department of Justice (Department) is considering revising the regulations implementing title III of the Americans with Disabilities Act (ADA or Act) in order to establish requirements for making the goods, services, facilities, privileges, accommodations, or advantages offered by public accommodations via the Internet, specifically at sites on the World Wide Web (Web), accessible to individuals with disabilities. The Department is also considering revising the ADA´s title II regulation to establish requirements for making the services, programs, or activities offered by State and local governments to the public via the Web accessible. Summary, 2010 DOJ web access ANPRM

In January of 2011 I testified at a public hearing about the importance of the web regulations. (You can read my testimony here.) Reading it over 11 years later, I like what I said, including this:

Remember that every limitation, every month of delay, every exception that you build into the regulations is a do not enter sign perched on the side of the information highway.Lainey’s testimony about 2010 proposed web access regulations

But there was a month of delay — in fact since I offered that testimony there have been 132 months of delay, because we still don’t have regulations. A little of that history is here:

Then after all that delay, the Republican administration elected in 2016 took all pending regulations off the table. (Even with the devastating 2016 U.S. federal election results, that year I quoted Helen Keller’s belief in optimism in my article that stemmed from my feeling of “responsibility to remind us all that digital accessibility is here to stay.”)

And yes, whatever happens with the currently-promised regulations, I believe the law (both in the US and globally) will continue to support digital accessibility. But regulations are critical. And not because the law doesn’t already require accessibility, and not because there should be any confusion that the current version of WCAG is the standard.

But as my friend and digital technologist and thought leader Chancey Fleet says, we need accessibility regulations just as we need a plumbing code. Everyone in the field needs something specific to point to. Something with no room for legal arguments. Want safe plumbing? Go here. Want disability inclusive tech – go there.

No debate, and, as I’ve frequently written, no more excuses.

To the contrary. The Civil Rights Division of the DOJ in both the Obama and Biden administrations have done / are doing important work to advance digital accessibility. The lawyers I know who are or have been in these positions are ethical, committed to digital inclusion, and skilled. I count many as friends and colleagues.

But bureaucracy often has a life of its own. So does politics. Things happen and delay sems inevitable. Still, if anyone can get web regulations out the door, I trust the current DOJ to do it.

Eliminating arguments about digital inclusion in the public sector (and later, hopefully, the private sector) depends on it. We can’t allow it to be a Sisyphean task.