This is a post about an award. Bank of America got the award at an event in New York put on by Disability Rights Advocates. The award was for leadership in disability inclusion. A Bank of America lawyer named Brian Frumkin accepted the award. He explained that the bank worked with blind customers as a result of Structured Negotiation. He talked about the bank’s commitment to access. He also talked about the disability community. Bank of America has worked with the blind people since 1995 as a result of Structured Negotiation. They share the work they are doing, including web and mobile accessibility and Talking ATMs.

On October 21, 2019 friends and supporters of Disability Rights Advocates, a national nonprofit disability rights legal center, gathered in New York to celebrate the organization and honor this year’s Eagle Award recipients. One of the honorees was Bank of America, a long-time digital accessibility and disability inclusion leader and Structured Negotiation champion.

The picture here shows me with two Bank of America leaders who attended the DRA event. To my left is Wil Lewis, Diversity & Inclusion Executive for Bank of America, Global Head of Employee Networks, Disability and LGBT Strategy. To my right is Brian Frumkin Associate General Counsel and Senior Vice President at the bank who I’ve worked with over many years on Structured Negotiation initiatives. [Read more below about Bank of America history of collaboration with the blind community.]

I attended DRA’s New York gala to be in the room when Bank of America received the award. I first began working with the bank on accessibility issues in 1995! I’m glad I did. I’m proud of the bank’s continued accessibility leadership. And proud of the role that collaborative advocacy — as shown in the remarks published here — played in that leadership. 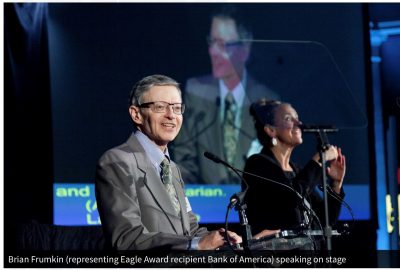 The following are the full remarks delivered by Bank of America lawyer Brian Frumkin at the DRA 2019 Gala, shared here with his permission:

“It was 1995, five years after passage of the ADA, when Bank of America received an unusual 20-page letter from two prominent attorneys representing vision impaired customers in california: Lainey Feingold and Linda Dardarian.

Attached to the letter was a 15-page draft complaint that was ready to be filed in federal district court in california alleging that the bank’s atms violated ada because they were inaccessible to vision impaired customers.

As you can imagine, it is not unusual for a major financial institution like Bank of America to receive a demand letter saying, in effect, “do what we want or we’ll sue.”

What was unusual about this letter, however, was that it was not simply a threat of litigation. Rather, it was proposing something new: a collaborative negotiation that was based on the novel concept that in certain cases where the parties can agree on the desired outcome, legal claims can best be resolved equitably and cost effectively if the parties work openly and honestly together to reach their common goal.

Now, as you can imagine, the lawyers at Bank of America, like other large companies, know how to fight. The typical response of some companies when threatened with litigation is to push back, using its superior resources and power to defend, delay and frustrate the other side. Eventually, after several years and countless attorney hours, the parties settle, often in a manner that neither side is happy with.

Back in 1995, the attorneys were proposing a different approach. Once the bank recognized that they were sincere and that a technical solution to the challenge was feasible, the

the “we win, you lose” mentality was replaced by a collaborative relationship based on cooperation and common goals

After exploring various hardware and software designs and involving the ATM manufacturers in the process, the parties reached out to vision impaired customers and employees to test the various solutions. Throughout the process, the attorneys and the bank worked together to develop the first talking ATMs, starting in california, and spreading across the country and, at least at Bank of America, to every machine.

A funny thing happened during our negotiation. As described in Lainey’s excellent book on this subject, a sense of trust developed between the bank, the attorneys and their advocates. As banking moved more and more towards self service channels, we built on the positive relationship created during the atm project and worked together to develop the first financial institution accessible websites in the country.

With our award winning online banking and mobile app, all customers, regardless of their circumstances, can now move money, pay bills, send wires, pre-schedule atm withdrawals, apply for a loan or credit card and even talk with Erica, our artificial intelligence solution.

And the innovation continues. With each of these enhancements, equal accessibility is always a primary consideration. No new digital product gets approved until ADA testing is completed, often with the help of members of our internal Disability Advisory Council.

In addition to making its banking products accessible, many of you have experienced first hand the bank’s community outreach and partnership with external disability rights organizations, including disability:in, the special olympics and goodwill industries. Also, our disability advocacy network with over 9000 members helps employees and their families by connecting them to opportunities for professional growth and development and sponsors community events focused on special needs planning, resources for children with disabilities and helping to build better financial futures.

In closing, i would like to share a personal note. Helping to build more accessible banking products has been one of the most satisfying parts of my career as an attorney for Bank of America.

In addition, bringing the collaborative approach to my practice has, I think, made me a more effective lawyer and, perhaps, a happier person.

For these reasons, it is a tremendous honor for me to accept this Eagle award on behalf of Bank of America.”

As Brian Frumkin mentioned in his remarks, you can read more about Bank of America’s accessibility leadership in my book, Structured Negotiation, A Winning Alternative to Lawsuits. In the book I share stories of the very first Structured Negotiations with the bank, the negotiations referenced in Brian Frumkin’s DRA remarks. [And the book explains how after those early years, as we learned more about collaboration, we stopped sending threatening letters with legal complaints attached!]

Here’s an excerpt, introducing an early Bank of America champion Bill Raymond, who accompanied blind advocates to Bank of America ATM labs during Structured Negotiation as some of the world’s first Talking ATMs were being developed:

Bill Raymond was a Bank of America senior vice president and the corporate owner of the ATM budget during our negotiation. Working with the blind ATM advocates was “very positive,” says Raymond. “There was nothing threatening about either the advocates or their lawyers.” Raymond became a corporate champion for accessibility. Not having a lawsuit on file, he agrees, “definitely” made it easier for him to get the permissions he needed within the bank. “Had it been more threatening,” he told me, “it would have been a lot easier for Bank of America to say no.” Those lab visits—which spawned two decades of a fruitful
relationship with one of the country’s largest financial institutions—might never have occurred. Structured Negotiation, A Winning Alternative to Lawsuits, p. 82

For Bank of America, these initiatives and more demonstrate that accessibility has not been a checklist or a one-and-done item. Many years ago I was attending a session at the AccessU Conference in Austin. Someone in the audience raised their hand with a question. The questioner started by explaining why his small company was at the conference to learn about accessibility: “We sell to Bank of America,” he said, “so everything has to be accessible.”

As it should be.

Congratulations to the other DRA Eagles this year — to advocate and donor Loreen Arbus and to DisabilityIn and its Executive Director Jill Houghton. DisabilityIn, a great organization I’ve done some work with, is the leading nonprofit resource for business disability inclusion worldwide, working with global corporate accessibility and inclusion champions. Read more about the DRA Eagle Awards