This is an article about a lawsuit. The lawsuit was filed by a deaf man who sued a company about its failure to have captions on the virtual reality (VR) games and programs it offered the public. Without the captions the man could not use the games and other aspects of the company’s VR service. The company tried to get the case thrown out of court. The judge disagreed and said the lawsuit could continue. The case argues that not having captions is a violation of the Americans with Disabilities Act (ADA) and laws in New York. This is the first case about captioning Virtual Reality content that Lainey is aware of. 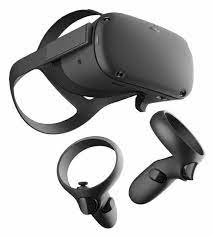 In 2020, lawyers for Dylan Panarra, a deaf man, filed a cutting edge lawsuit against the HTC corporation, one of the biggest electronics companies in the world. The lawsuit stated that HTC violated the Americans with Disabilities Act (ADA) because there is no captioning on the company’s Virtual Reality (“VR”) content housed on its subscription service called “Viveort Infinity.” That content included “thousands of VR content, including games, videos, and other apps and programs.”

The case was filed in federal court in the Western District of New York. The first court ruling in the case came on April 15, 2022.

Court rejects company’s effort to throw case out of court

In 2021, HTC asked the judge to dismiss the case. It argued that its subscription service was not covered by Title III of the ADA  because it was a digital service only and not a physical “place of public accommodation.” The company, which has been referred to as the “Netflix of VR programs,” also argued it didn’t have enough control over the VR content offered through its subscription service to provide captions.

On April 15, 2022 the judge issued his order. He denied HTC’s request to throw the case out of court. In a 13 page order, the judge carefully went through each of the company’s arguments and found that the plaintiff stated a claim under the ADA and the case can move forward. (The judge also refused to dismiss disability discrimination claims in the case based on the New York State Human Rights Law and the New York City Civil Rights Law.)

On the question of ADA coverage even though HTC was a web-only business, the judge in the HTC case relied on a 2015 court order in another important disability rights case brought by the National Federation of the Blind against Scribd, an online digital library reading subscription service. In my Summer 2015 Legal Update on this website I started the section about the Scribd court ruling by writing “One of the best court decisions i’ve read in a long time was issued On March 19, 2015 in the National Federation of the Blind’s case against Scribd.” I guess the judge in the HTC case thought so too!

Case is not over but still important

This case isn’t over, and if the parties don’t settle there could be many battles ahead. But this is still a huge initial victory in an important case. Congratulations to Mr Panarra and his lawyers, Andrew Rozynski of the New York civil rights firm Eisenberg & Baum, LLP and its Law Center for Deaf and Hard of Hearing.

There is so much conversation about unethical lawyers and plaintiffs in the digital accessibility space. It’s great to be sharing a case — one of many — brought by ethical lawyers on behalf of a disabled client impacted by barriers that prevent equitable participation in today’s digital world. A case that relies on the ADA as a hard-fought for law designed to protect the civil rights of people with disabilities.

The case also matters because, as far as I know, it is the first on the issue of VR captioning. Technology is advancing. The law must keep up. This case is one of a handful going beyond web and mobile accessibility to address the pressing need for digital inclusion in all technology. Accessible kiosks, workplace tools and software, podcasts, and now Virtual Reality are just some areas of the digital world where the law is paying attention.

Sometimes a single order in a single case like this one can significantly raise awareness of the need for accessibility for a particular type of technology or in a particular sector. I hope this case has that impact when it comes to captions for virtual reality apps, games, and other programs.

Here are some resources I rely on to understand accessibility in the context of virtual reality (VR), extended reality (XR), and other emerging technologies.

Have other resources on accessible virtual reality, extended reality, and other emerging technology? Please let me know and I will update this post.

As a solo lawyer with no staff (and not even a subscription to a legal case service) I rely on the kindness and attention of others to (at least try) to keep up with the law in the digital accessibility legal space. For this case, my hat is off to Thomas Logan of the web consultancy Equal Entry and the Virtual Reality MeetUp linked above.

I was recently bemoaning the fact that the law was not keeping up with new technology like VR when someone said he had just heard about a VR Captioning case (this one!) from a talk that Thomas gave.

Then, when I reached out to Thomas to learn the name of the case, I discovered that Sheri Byrne-Haber wrote about the case when it was first filed in 2020 in a post titled This Week in Accessibility: First lawsuit filed over lack of captions in VR. The captioning and audio description consultancy 3Play Media had also written about the case back in 2020.