This is an article about the United States federal judge who wrote the opinion in the Winn-Dixie web accessibility case. That opinion said that a blind man could not win his lawsuit against Winn-Dixie for its inaccessible website. The judge who wrote the court opinion was appointed by Donald Trump. Her name is Elizabeth Branch. She has also ruled against Black people trying to protect their right to vote. 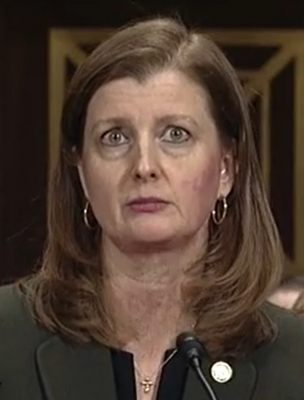 On April 7 the 11th Circuit Court of Appeals issued an Opinion in a web accessibility lawsuit against the Winn-Dixie grocery chain. As a disability rights lawyer who has worked in the digital accessibility legal space for more than a quarter of a century, I was dismayed with the Opinion.

It held that the Americans with Disabilities Act did not protect the right of a blind shopper to access the Winn-Dixie website. This was the Opinion even though the court agreed the website was not accessible and even though it agreed that the blind shopper could not order his prescriptions on line like sighted people could. Read my article about the Winn-Dixie Opinion.

The judge who wrote the Winn-Dixie Opinion is a white woman named Elizabeth (“Lisa”) Branch. Her picture illustrates this post. She was appointed to the position in 2017 by Donald Trump and confirmed in 2018 by the Senate with a vote of 73 – 23 (with 4 senators not voting).

In 2020 Judge Branch was featured in a Guardian article titled “Meet some of Trump’s most conservative judicial picks” It is disappointing to say the least that many Democratic senators voted for her confirmation. (Roll-call vote of Elizabeth Branch confirmation here.)

The more I learned about Judge Branch, the more I understand how her opinion in Winn-Dixie is part of a larger effort to turn back the clock on civil rights in the United States. Donald Trump may no longer be president of this country, but his judicial appointments are actively working to limit rights of disabled people, immigrants, Black, Indigenous, People of Color (BIPOC), and others.

Here are just three opinions written by Elizabeth Branch. They highlight that the Winn-Dixie Opinion is not the first time, and won’t be the last, that this judge is on the wrong side of a civil rights issue. And the wrong side of history.

If you want more, please visit the Confirmed Fears website maintained by the People for the American Way. There you can search for “Elizabeth Branch” and find (as of this date) “29 results for bad rulings voted on by Elizabeth Branch.” The site monitors “how Trump judges’ rulings are affecting rights and freedoms in many critical areas.”

Alabama State Conference of the NAACP v. Alabama is a voting rights case brought by Black voters and a local chapter of the NAACP. Alabama argued that organizations and individual voters could not sue under the Voting Rights Act. The majority opinion disagreed, recognizing that

For more than fifty years, private parties have sued states and localities under the VRA to enforce the substantive guarantees of the Civil War Amendments majority opinion in NAACP v. Alabama

Judge Branch wrote a dissent, siding with the state of Alabama. She concluded that Black people and civil rights organizations should not be able to sue under the Voting Rights Act.

An article on the case summarized her effort to turn back the clock by saying “The 11th Circuit majority said Branch, a Trump appointee, would undermine 50 years of civil rights litigation.”

In another voting rights case called Greater Birmingham Ministries v. Secretary of State for the State of Alabama Judge Branch wrote the majority opinion that upheld a restrictive voter identification law in Alabama. She held that the voter i.d. law was ok even though she acknowledged that evidence showed that minority voters were twice as likely as white voters to lack photo ID acceptable to the state.

As with the Winn-Dixie case, there was a very strong dissent by the third judge on the panel, Judge Darrin Gayles. Judge Gayles, a Black gay judge appointed by President Obama, began his passionate dissent by writing “Courts in this Circuit have long recognized “Alabama’s deep and troubled history of racial discrimination” and voter suppression.”

Judge Gayles is the first openly gay African-American man to be confirmed as a United States federal judge.

Read a People for the American Way blog post about the opinion.

United States of America v. State of Florida is a 2019 ADA Olmstead case brought by the U.S. Department of Justice about Florida’s unnecessarily institutionalizing hundreds of children with disabilities in nursing facilities.” Florida tried to get the case thrown out of court.

An article by People for the American Way described Branch’s dissent as follows:

Eleventh Circuit Trump judge Elizabeth Branch dissented from a September decision in United States v. Florida and would have held that the Justice Department cannot go to court to enforce Title II of the Americans with Disabilities Act (ADA). Title II is the section that prohibits discrimination in public services by cities and states. People for the American Way blog post

I began looking into Judge Branch’ other opinions to try to understand the judge who wrote such a mean-spirited opinion in the Winn-Dixie case. A decision that twisted the ADA, ignored facts, and discounted the rights of disabled people to participate in the digital world.

Now I know. The Opinion was written by an idealogical judge who seeks to limit the rights of under-represented groups at every opportunity. I invite readers to read the 34 page Winn-Dixie dissent by Judge Jill Pryor, appointed by President Obama, to see what might have been. (It starts on page 34.)