This is a post about an idea in Lainey Feingold’s book.  “When all you have is a hammer everything looks like a nail” is an expression that applies to the law.  Lawsuits should not be the only tool to resolve a legal problem.  Lainey’s book is about Structured Negotiation, another tool.  Structured negotiation is a win-win method to solve legal claims without filing a lawsuit. It has been used by disabled people for twenty years and can be a method for others too. 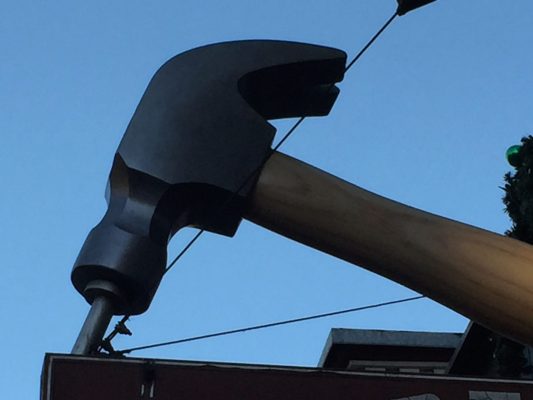 [This is the first in a series of short posts about the themes, issues and people in Lainey Feingold’s book, Structured Negotiation, a Winning Alternative to Lawsuits. If you would like to receive these posts by email, sign up for Lainey Feingold’s email list]

Over the holidays I took a walk along San Francisco’s iconic Haight Street. When I saw a giant hammer mounted on the Roberts Hardware sign (included in this post) I knew I wanted to write about one of my favorite Structured Negotiation themes.

“When all you have is a hammer everything looks like a nail” is an idea that appears in my book on page three:

I wrote this book to share how Structured Negotiation provides lawyers and clients a cost-effective, non-adversarial way to resolve legal disputes, and to give readers the skills and strategies needed to settle claims without a lawsuit on file. Litigation plays a crucial role in enforcing rights, and sometimes it is the best or only option. But when all you have is a hammer, everything looks like a nail. Structured Negotiation offers another set of tools.Structured Negotiation, a Winning Alternative to Lawsuits, p. 3

Researching the phrase, I learned it has the official name of “law of the instrument,” or “Maslow’s hammer.” It’s meaning described in Wikipedia as “an over-reliance on a familiar tool.”

What do hammers and nails have to do with a book about dispute resolution, accessible technology, and the civil rights of blind people? Too often, filing a case in court is seen as the only option available to resolve claims. Filing a lawsuit is the hammer — the go-to tool of many lawyers, advocates, and clients needing a way to solve a legal problem.

Sometimes the hammering lawsuit is the perfect tool, as I mention throughout the book. Often though, other tools can get the job done. And those alternatives can get it done cheaper, quicker, and with significant less stress on everyone involved.

Structured Negotiation is one such tool — a method of enforcing and protecting rights and resolving claims without a lawsuit on file. The stories in my book illustrate how my clients, co-counsel, negotiating partners and I have used the process for twenty years to resolve disability civil rights claims, particularly accessible technology claims. But the book breaks the method into bite-sized pieces so lawyers and advocates in other fields can try it for themselves.

Walmart, Major Leagues Baseball, Anthem, Inc., the City and County of San Francisco, and Bank of America are among those that have avoided the hammer in resolving technology claims advanced by the blind community. I think Structured Negotiation can be a tool for others too, on other issues, with different types of claims. I’m eager for my readers to share their experiences.

Structured Negotiation of course is not the only tool for those seeking to bypass the hammer. The just-published Lawyers as Changemakers by J. Kim Wright surveys collaborative and relationship-focused tools in use around the globe. I’m honored that Wright includes Structured Negotiation among the many non-hammery tools she describes.

An unexpected gift of having my book published by the American Bar Association is meeting lawyers and dispute resolution professionals using tools beyond the hammer. Planned Early Negotiation — the subject of an ABA book by lawyer and professor John Lande, encourages early resolution of filed cases and offers the tools to do so. I reference John’s important work in my book.

And after my book was published I discovered an article by Boston-based mediator Michael Zeytoonian that explains why the litigation hammer can no longer be the default tool. He writes in the October 2016 issue of the Boston Bar Journal

In other words, keep the hammer in the tool box, but don’t reach for it first.

There’s even a song

Singer songwriter Gretchen Peters wrote a song about the hammer theme called (what else?) “When All You Got is a Hammer.” It appears on her 2015 album Blackbird. You can listen to the song and read the lyrics on Gretchen Peters’ website.

The song tells the story of a soldier returning from war with PTSD:

“well he came home from the desert
with a medal on his chest
like a hero, like a champion
but he felt more like a guest
now he sleeps with one eye open
and he wakes up scared as hell
and all he’s got is a hammer
and everything looks like a nail”

The chorus repeats throughout:

Song meanings are always elusive, but I read this one as lamenting the limited options available both to the veteran, and to society stuck on war and violence. In Chapter 2 of Structured Negotiation, a Winning Alternative to Lawsuits, I write about the militaristic language that imbues traditional litigation:

Trench warfare. Loaded for bear. War rooms. War stories. The litigation arena is littered with words of war. A legal newspaper runs an article with the startling headline It’s War! Tips on Preparing and Running a Litigation War Room. A prominent legal blog publishes The Rules of Warfare (and Litigation), explaining, “It has often been observed that litigation is war. The analogy is not perfect, but studying military strategy and tactics can prove fruitful for litigators.”Structured Negotiation, a Winning Alternative to Lawsuits, p. 15

In the following paragraph I question my profession’s traditional language of choice:

Why is war the prevailing metaphor for the primary means our society has established to resolve disputes? Why is battle the go-to analogy instead of peace? Are bellicose words an inherent part of resolving legal claims?

The answer of course is no. The chapter goes on to talk about the language of Structured Negotiation, and its powerful role in establishing the space where disputes can be resolved in collaboration.

Structured Negotiation has worked for twenty years to resolve legal claims without lawsuits, skipping the wasteful arguments and negative conflict that too often imbues dispute resolution. The stories in my book are proof: A legal dispute need not be the proverbial nail, pounded with the hammer of litigation. Structured Negotiation offers another tool.