This post is part of an occasional series about recent legal developments impacting technology and information access for people with disabilities. This post covers activity from March 12, 2015 through August 10, 2015. You can find earlier Updates in the Legal Updates Category of this website. The series is illustrated by a toolbox — because law has proven an effective tool to improve the accessibility and usability of digital content, print information and technology for everyone. There are many ways to use the law, reflected by the many tools in the toolbox and by the updates reported in this post. Read more… Digital Accessibility Legal Update (Summer 2015)

Congratulations CVS Health! Today the largest integrated pharmacy company in the United States announced that is now offering talking, braille and large print prescription labels through its mail service pharmacy, commonly known as Caremark. The labels are available to Individuals with vision impairments. This important health, safety and accessibility initiative was reached as a result of a collaboration with the American Council of the Blind and several blind Caremark members. The press release below, announcing the initiative, expands CVS Health’s commitment to its blind members across the country. Read more… Caremark Offers Talking Prescription Labels, Braille, Large Print 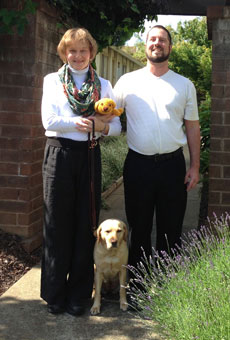 Becky Griffith was a valuable member of the blind community and a valued Structured Negotiations participant. She died earlier this month at the too-young age of 44. Becky was a claimant in successful Structured Negotiations with Safeway grocery chain. (A Structured Negotiations claimant is the equivalent of a plaintiff in a lawsuit. We use different terminology to emphasize that Structured Negotiations is a collaborative, not an adversarial process.) The Safeway effort convinced the company to upgrade its online grocery shopping site to satisfy the Web Content Accessibility Guidelines 2.0 Level AA so blind people (and everyone else) can use it. In this post you can read more about her participation in the Safeway negotiations, and about the qualities that made Becky a strong advocate for the rights of blind people. Read more… Becky (Welz) Griffith (1971 – 2015)

Bank of America has long been a leader in its commitment to accessible digital content. The agreement posted here concerns accessibility enhancements to the bank’s travel rewards redemption site. This agreement was reached through Structured Negotiations, a collaborative dispute resolution process. Structured Negotiations has been used for twenty years to successfully resolve accessibility claims without lawsuits. Read more… Bank of America Credit Card Rewards Website Agreement

Every six months, agencies in the United States federal government must notify the public about the status of pending regulations. On November 19, 2015, The U.S. Department of Justice (DOJ) gave an update about pending regulations regarding the accessibility of websites. As the agency has done many times before, the update boils down to a five letter word: Delay. Read more… Fall 2015 Update: More Delay for DOJ Web Regulations