Chen Guangcheng is a blind lawyer and human rights activist in China. Chen is a true hero regardless of his disability. Growing up blind in China is difficult. Most blind people cannot go to school. 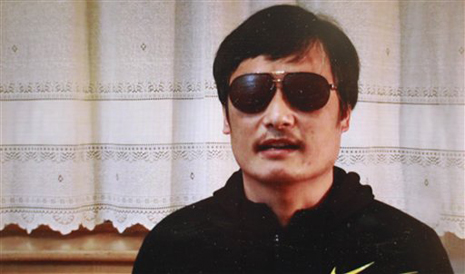 UPDATE: Read about Chen Guangcheng’s letter in support of the United Nations Convention on the Rights of People with Disabilities (CRPD).

As a lawyer who has represented the blind community for the past seventeen years, I feel a particular affinity for the story of Chen Guangcheng, the blind Chinese lawyer and human rights activist whose bravery has captivated news audiences the world over. Chen is being recognized across the globe for his courageous human rights work and his movie-quality escape from house arrest. Is he capturing media attention in part because he is blind? Maybe. While under any definition Chen would be a hero worth celebrating, Chen’s blindness is certainly part of what makes his story so compelling.

Being Blind in China

In China, most blind people do not receive an education, making the fact that Chen Guangcheng is a self-taught lawyer all the more impressive. Blindness is a stigma in China (as it is in much of the world), especially in rural areas where Chen is from. Preconceived and outdated notions about blindness limit opportunities for meaningful work, educational and social relationships. While the situation is slowly improving in urban areas, people with disabilities in China, including those who are blind, are shunned not just by the general public, but often even by their own families.

And, as in many parts of the world, blind people in China are forced into a very limited number of occupations if they work at all. Massage therapy, unskilled manufacturing, fortune telling, or singing in the street for money are frequently the only opportunities for employment. Becoming a lawyer? Almost unheard of.

A Lawyer with Commitment and Heart

[Read the comment below about identifying Chen as a lawyer.]

Not only did Chen become a lawyer, but he chose to use his skills fighting for the rights of people with disabilities, women, and others oppressed by Chinese policies. According to a 2006 article in the New York Times, Mr. Chen first gained celebrity in China after he “helped disabled people win cases against government agencies that did not grant them the full protections and benefits they are entitled to under Chinese law.”

And Chen spent four years in prison for his work in exposing the thousands of forced abortions and sterilization procedures performed on women by government population control officials.

A true hero having nothing to do with blindness or sight.

Appreciation from Blind Advocates in the United States

Blind advocates in the United States do not face the threat of prison, house arrest, or beatings for their beliefs, yet they work hard every day to make sure people with visual impairments are fully integrated into all aspects of American life. Many work on these issues on the international stage, as part of the World Blind Union and other international organizations.

While Chen Guangcheng is not fighting for anything blindness specific, and is not specifically a blind person’s hero, admiration for Chen as a person and an advocate has not escaped the blind community in the United States.

Kit Lau who, like Chen, was born in China and became blind in childhood, was not allowed to go to school until she was a teenager. Her family emigrated to the United States when she was 22 and Lau recently retired from a career in the U.S. government:

I have a lot of admiration for Chen Guangcheng and I am also very surprised. Most blind people in China are hidden away, particularly in rural areas, and just give up because of cultural attitudes and lack of opportunity. Chen’s story impressed me a lot and he has all my admiration. — Kit Lau

Kim Charlson, the first blind Director of the Perkins Braille and Talking Book Library and Vice-President of the American Council of the Blind, knows that Chen’s blindness is not first and foremost what makes him a hero:

The achievements of Chen Guangcheng as an advocate willing to risk his life for human rights is truly noteworthy and stand on their own. That he was able to do all this in China as a blind person adds to his achievements, and he deserves honor and recognition from the blind community. You could say he gets “extra points” because he is blind, but what he will be remembered for is his bravery and tenacity as a fighter for human rights. — Kim Charlson

And Josh Miele, Director of the Smith Kettlewell Video Description Research and Development Center in San Francisco who has been blind since childhood, noted that while Chen is a human rights activist and not a blindness advocate, many blind people (himself included) feel a bond because of Chen’s blindness. How relevant is Chen’s blindness? According to Miele:

Blindness is always the first adjective of the news story. But the fact that Chen is blind is not really relevant except to make the security guards look like buffoons. Blindness captures the imagination and satisfies the media’s hunger for novelty. Overall, what Chen did is amazing, but the level of attention he is receiving may well have to do with that fact that he did all this while blind. — Josh Miele

As a sighted lawyer who works with the blind community, I am humbled in the face of Chen’s commitment and courage. He has a vision for a just society that does not depend on sight, and is willing to risk his life for it. That is what makes him a hero.

Comment from reader Kelly Pierce, a blind activist in Chicago

I feel it is inaccurate to describe Chen Guangcheng as a lawyer without qualification. People in the western world have an image of someone when they are described as a “lawyer” or “attorney.” This image is of someone who is credentialed by a school with a program that teaches legal theory or legal practice. All large countries, including China, have a system that licenses or certifies people to identify those who are qualified to practice law and represent clients.

Chen was illiterate until age 23 when he enrolled at a school for the blind. Four years later, he began training in Chinese medicine. He specialized in massage and acupuncture. Bodywork is about the only career path open to nearly all blind people in Asia, including China. His family read legal text to him before he entered any school and he later audited law classes. Unlike in North America and Europe, Law schools are generally not open to blind people in China.

He can be described as a self-trained lawyer, but this is a rather generous term. Simply saying he is a lawyer, doesn’t accurately represent the barriers he and other blind people face in China in obtaining a legal education or being recognized by his profession or
government as being qualified to represent the interests of people in the community in a legal context. It is these attitudinal barriers in many different societies around the world that prevent blind people from reaching their full potential. Elevating Chen’s status ignores the substantial attitudinal barriers erected by Chinese institutions toward blind people. Discrimination toward the blind and limited opportunity is rampant throughout official China, including the ability for blind people to be trained and officially recognized as a lawyer. [Back to lawyer section of this post]