This is a press release. It announces that Houston METRO is making its website easier for everyone to use, including disabled riders.  Houston METRO also wants all members of the public to be able to use its mobile applications. Print documents will also be offered in other formats.  METRO worked with blind riders in this important effort. The transit agency also worked with disability rights lawyers in Texas.  There was no lawsuit needed.  METRO is now a national leader in providing user-friendly written and digital information. 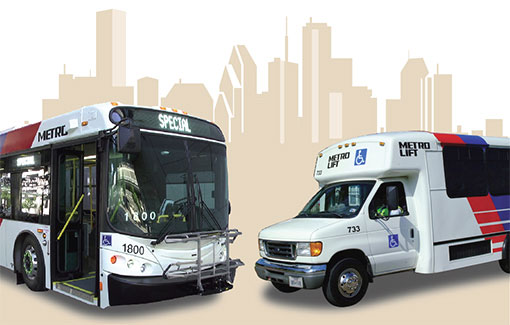 Congratulations Houston METRO! Posted here is the press release issued by the Metropolitan Transit Authority of Harris County announcing the agency’s digital accessibility initiative. This initiative is the result of Structured Negotiation between the transit agency, whose official name is the Metropolitan Transit Authority of Harris County, and two of its blind riders. The blind riders were represented by Christopher McGreal of Disability Rights Texas, assisted by the Law Office of Lainey Feingold. No lawsuit was filed or needed. Read more about Structured Negotiation, an alternative dispute resolution process that focuses on solution and avoids the conflict and expense of a filed lawsuit. With today’s announcement Houston Metro assumes a leadership role in guaranteeing that all members of the riding public have access to important and timely transit information.

HOUSTON (March 17, 2016) — Consistent with its commitment to all of its riders, the Metropolitan Transit Authority of Harris County (“METRO”) today announced an initiative to make its affiliated websites, mobile applications, and print formation more accessible and inclusive. METRO is taking the lead in the public transportation field regarding online accessibility for individuals with visual impairments. The organization adopted the Web Content Accessibility Guidelines (WCAG) version 2.0 level AA as its accessibility standard and is making enhancements to work toward meeting this standard. METRO will also continue providing braille, large print, electronic, and audio versions of print information to riders with visual impairments upon their request within a reasonable time after the request has been made.

METRO worked with blind riders and with Disability Rights Texas, a non-profit legal advocacy agency serving Texans with disabilities, on its accessibility initiative.

With this announcement, Houston Metro has assumed an important leadership role across the Houston Metroplex and Harris County in serving its riders who are visually impaired.Houston Metro rider Lisa Batist

George Battiste, a Texas resident who is a regular Houston Metro rider and has been blind since birth, agreed.

I applaud Houston Metro’s significant efforts in ensuring that I and other people with visual impairments will be able to independently read important transportation information,Houston Metro rider George Battiste

The WCAG 2.0 guidelines are published by the Web Accessibility Initiative (WAI) of the World Wide Web Consortium (W3C), an international community that develops open standards to ensure the long-term growth of the Web. The guidelines ensure that websites and mobile applications are developed and designed to be accessible to persons with visual and other disabilities. More information is available at w3.org/WAI.