This post is about a new California law. There now needs to be keypads in all retail locations with flat screen check-out devices. Keypads let blind people enter their PIN by themselves. No one should have to share confidential information with a store clerk. 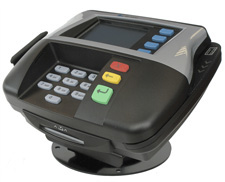 Effective January 1, 2010, tactile keypads are required at every check-out location in California with a flat screen point of sale device. The keypads must be permanently attached.

The new law, California Financial Code Section 13082, was actually passed in 2005, but retailers were given four years — until January 1, 2010 — to bring their stores into compliance. (Retailers with only two point of sale devices are only required to have a keypad at one of them.)

Tactile Keypads are needed so that customers with visual impairments can confidentially and privately enter their PIN when using a debit or other PIN-based card. The keys are arranged like a standard telephone keypad with a raised dot on the five key to assist blind people in orienting to the device. Raised symbols and clear color contrast on function keys (such as enter and cancel) are also important.

While California has a specific requirement for the number of keypads to be installed, the devices are required in every state to ensure compliance with the nondiscrimination, equal service, and effective communication provisions Americans with Disabilities Act and the laws of many other states.

Read the list of agreements reached about tactile keypads.