This document is the press release announcing that Citibank installed the first Talking ATMs in New York. This release is about the second legal agreement that Citibank signed about Talking ATMs. The bank agreed to install Talking ATMs at all of its United States branch locations. Lainey Feingold and Linda Dardarian were the lawyers for the blind community. No lawsuit was filed. Instead, a formal process known as Structured Negotiations was used. The Disability Rights Education and Defense Fund (DREDF) was also involved. [Back to Press Release] 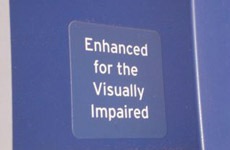 New York (May 22, 2001) — Citibank today announced the installation of New York’s first five talking ATMs. The ATMs, using text-to-speech technology, deliver audible information privately through an earphone so that persons who are blind, or who may otherwise have difficulty reading an ATM screen in print, can independently use the ATM. The five New York machines, along with five Citibank talking ATMs in California, are the beginning of a sixteen-month plan unveiled today to install a talking ATM at each of Citibank’s Financial Centers and its ATM centers across the country. The machines will be upgraded, improved versions of talking ATMs originally installed by Citibank in November, 1999. Exact locations of the machines are listed at the end of this announcement.

Citibank’s announcement was hailed by members of the blind community who have worked with Citibank on the talking ATM project. Steven Mendelsohn, a blind technology policy analyst and disability rights advocate who lives in New York, has been working with the bank for several years on the talking ATM initiative: Citibank’s agreement to make ATMs fully accessible to all customers, including customers with visual impairments, represents another important milestone on the path to full social participation and economic opportunity for Americans with disabilities, he said. Citibank’s willingness to recognize and implement what technology makes possible should serve as an example to financial institutions and other businesses across the country.

These machines utilize state of the art text-to-speech technology to ensure full access to persons who cannot read an ATM screen, said Kathy Martinez, Deputy Director of the World Institute on Disability, an international disability research and policy agency in Oakland, California, and Citibank deserves tremendous praise for todays announcement. These thoughts were echoed by Lori Scharff, President of the American Council of the Blind of New York, Inc., who praised Citibank’s national commitment to cutting edge, accessible technology.

Citibank wanted to fully understand the needs of visually impaired consumers in order to provide a superior technology solution for those needs, said Maura Markus, President of Citibanking North America. Representatives from the visually impaired community provided invaluable assistance and support to help us meet that goal, and we look forward to working with them as we implement our program across the U.S.

The agreement announced today resulted from a collaborative effort that began when members of the blind community approached Citibank to discuss how the companys ATMs could be programmed to communicate audibly with blind and low vision consumers.

In addition to Mendelsohn and Martinez, the California Council of the Blind, an affiliate of the American Council of the Blind, with 46 chapters across California, actively participated in the discussions with the bank. Lawyers for the blind community were Linda M. Dardarian of the Oakland law firm of Saperstein, Goldstein, Demchak & Baller, Berkeley disability rights lawyer Lainey Feingold, and the Berkeley-based Disability Rights Education and Defense Fund.

For the blind community