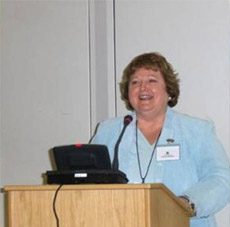 Cynthia Waddell, a pioneer in developing and advocating for legal theories to support website accessibility for people with disabilities, died on April 3, 2013. In 1998, two years before the first Structured Negotiations web accessibility settlement, eight years before the Target web litigation was filed, and long before the U.S. Department of Justice stated its intention to issue web accessibility regulations, Cynthia wrote an article explaining the legal basis for universal design in the development of webpages. Before Twitter and its ubiquitous #a11y and #ux hashtags, Cynthia was an international advocate for an inclusive web, open to all.

In 1998 Cynthia wrote a paper entitled Applying the ADA to the Internet: A Web Accessibility Standard. It may well be one of the first legal papers urging universal design in the development of internet pages. She also founded, and at her death was the Executive Director of, the International Center for Disability Resources on the Internet (ICDRI), one of the earliest sites on which to find extensive information about what is increasingly referred to as digital accessibility. According to Steve Mendelsohn, an attorney and long time accessibility advocate:

Cynthia Waddell was one of the early people to recognize the value of on-line resources to promote international efforts around internet accessibility. She was one of the pioneers in creating on-line communities dedicated to web accessibility, and had a depth of knowledge about international laws and regulations that she was always generous and enthusiastic about sharing with others.Steve Mendelsohn, lawyer and advocate

Before LFLegal.com and before the LFLegal Twitter account and curated email lists, The Law Office of Lainey Feingold relied on ICDRI to publicize Structured Negotiations settlements and press releases on Talking ATMs, accessible websites and more. Cynthia, and her ICDRI colleague Michael Burks, were always generous and supportive of Structured Negotiations as an advocacy method.

Cynthia was also a frequent speaker at the CSUN International Conference on Technology and Persons with Disabilities, doing legal presentations about web accessibility before Linda Dardarian and I began our annual Legal Updates.

You can learn more about Cynthia Waddell and her work to advance digital inclusion on the ICDRI website. You can also read a 2009 interview with Cynthia Waddell.

Cynthia Waddell graduated from Santa Clara University Law School in 1994, and over the years the school has recognized her achievements. In 2003, for example the School recognized an award she received for “Leadership in Accessible Technology and For Pioneering Advocacy and Education.” And in 2010 there was an article in the Santa Clara Law Magazine which began by stating that “Cynthia Waddell ’94 has spent her legal career fighting for justice and access for those with disabilities.”

Yet today, Santa Clara University Law School employs one of the most anti-web accessibility law professors in the country. Eric Goldman, author of the Technology and Marketing Law Blog, is a Professor of Law and Director of the High Tech Law Institute at Waddell’s alma mater, Santa Clara University Law School. Through his blog, Goldman advances legal (and political) theories designed to deny people with disabilities the legal support needed to ensure an inclusive, usable and accessible web.

Here’s an example from a May, 2011 Goldman post talking about a couple of isolated cases where defendants succeeded against accessibility claims brought by individuals who were not represented by lawyers: “[T]hese rulings are a useful warning to future plaintiffs that it’s frivolous to argue that websites are governed by the ADA.” Goldman has also referred to the landmark web accessibility ruling in Target as “troubling.”

Fortunately the court in the Massachusetts Netflix case and the U.S. Department of Justice and other legal scholars disagree with Goldman. And, through Structured Negotiations web access settlements, many of the country’s largest corporations have recognized the value of web accessibility without fighting about legal issues at all. Still, the next generation of students at Cynthia Waddell’s alma mater deserve better.