In this document, 7-Eleven agreed to put equipment in every store in the U.S. so that blind people can enter their PINs (secret codes) when they use their debit cards. All 7-Eleven Point of Sale devices will have keypads by 2009. The keypads will be like telephone keypads with a raised dot on the five key. The agreement was signed with the American Council of the Blind (ACB), the California Council of the Blind (CCB), and the American Foundation for the Blind. Lainey and Linda Dardarian were the lawyers for the blind community. No lawsuit was filed. Instead, formal talks called Structured Negotiations were used. 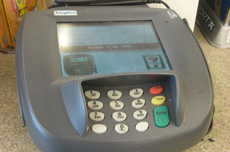 This Settlement Agreement and the related document entitled Confidential Addendum to Settlement Agreement (collectively referred to herein as the “Full Agreement”) are entered into as of the Effective Date, as defined below in Section 1.6, by and between the following parties: American Council of the Blind (“ACB”), American Foundation for the Blind (“AFB”), and California Council of the Blind (“CCB”) (collectively, the “Claimants”), and 7-Eleven, Inc. (“7-Eleven”). Claimants and 7-Eleven are at times referred to collectively herein as the “Parties.”

The Full Agreement is based on the following facts:

As used in the Full Agreement, the following terms shall be as defined below:
1.1.
7-Eleven Store means a store owned, leased, or operated by 7-Eleven in the United States.
1.2.
Access Laws means the Americans with Disabilities Act (as defined below) and any applicable laws of any state, county or municipality relating to accessibility for persons with disabilities to places of public accommodation, any regulations or guidelines promulgated pursuant to those statutes, or any other applicable disability laws, regulations, or legal requirements, including, without limitation, California Civil Code §§ 51 et seq. and 54 et seq., California Financial Code § 13082, California Health & Safety § 19955, and Title 24 of the California Code of Regulations.
1.3.
Americans with Disabilities Act or ADA means the Americans with Disabilities Act of 1990, 42 U.S.C. § 12101, et seq., and the Title III implementing regulations, 28 C.F.R., Part 36.
1.4.
Claims means the contention by Claimants and their respective boards, staff, members and clients, and other blind and visually-impaired persons, that they are being, have been and continue to be discriminated against pursuant to applicable Access Laws due to the lack of tactile keys on POS Pinpads in 7-Eleven Stores (“POS Claims”).
1.5.
Counsel means Goldstein, Demchak, Baller, Borgen and Dardarian, The Law Office of Elaine B. Feingold, and the attorneys practicing law therein.
1.6.
Effective Date means October 31, 2007.
1.7.
Equivalent Pinpad means a POS Pinpad that provides a visually-impaired user the same or greater level of privacy and ability to perform Functions set forth in Section 1.13, below, as provided with the POS Pinpad with Integrated Tactually Discernable Keypad, and which can be rolled out pursuant to the schedules set forth in section 3 of this Agreement.
1.8.
Existing 7-Eleven Store means a 7-Eleven store that was open to the public on or before October 15, 2007.
1.9.
New 7-Eleven Store means a 7-Eleven Store that is first opened to the public after October 15, 2007.
1.10.
Personal Identification Number, or PIN means a unique numerical code used to identify an individual that must be entered into a POS Pinpad before conducting certain transactions on the POS Pinpad.
1.11.
Point of Sale Pinpad, or POS Pinpad means a device used by a customer at a point of purchase that allows the customer to pay for items with a debit, credit or cash card. Point of Sale Pinpad does not include other equipment that may be used by a customer in conjunction with the Pinpad to scan, price, or weigh products.
1.12.
POS Pinpad Function, or Function means a task related to payment for purchases that can be performed by the customer through the POS Pinpad.
1.13.
POS Pinpad with Integrated Tactually Discernable Keypad means a POS Pinpad with a Tactually Discernable Keypad that is an integral part of the pinpad, which may be used to perform the following Functions on the integrated keypad: input, correct, cancel and enter PIN and cash-back amounts; submit card data; submit signature; and any Functions that involve inputting, correcting, canceling or entering information that is personal or affects access to personal information or resources, to the extent such Functions are available to sighted persons using the unit. Additionally, as soon as practicable after the Effective Date, if customers are required to sign directly on the Point of Sale Pinpad, there shall be no virtual function keys below the signature line, and the signature line shall be on the lowest portion of the screen. The Ingenico 6770, a picture of which is attached hereto as Exhibit A, is a POS Pinpad with a Tactually Discernable Keypad within the meaning of this section.
1.14.
Tactually Discernable Keypad means a number keypad on which each key is tactually discernable from surrounding surfaces and adjacent keys. Numeric keys shall be arranged in a 12 key ascending telephone keypad layout. The number five key shall be tactually distinct from the other keys by means of a raised dot. The following function keys on the Tactually Discernable Keypad shall be to the right of the number keys: Enter (Accept), colored green and marked with a raised circle; Cancel, colored red and marked with a raised “X,” and Correct, colored yellow and marked with a raised left arrow. All text and numerals on all keys shall be colored to contrast with the key color.

2. Duration and Geographic Scope of Agreement.

The Full Agreement shall apply to 7-Eleven Stores in every State in the United States in which 7-Eleven operates. The terms of the Full Agreement shall remain in effect from the Effective Date until December 31, 2009. The only obligations of either party that survive beyond December 31, 2009 are those described in Section 2.1 of the Confidential Addendum, which shall at all times remain in effect and enforceable.

5. Procedures in the Event of Disputes.

5.1. Notice of Non-Compliance.
If at any time a party believes that the other party has not complied with any provision of this Agreement, that party shall provide the other party with Notice of Non-compliance containing the following information:
5.1.1. the alleged act of non-compliance;
5.1.2. a reference to the specific provision(s) of the Agreement that is (are) involved;
5.1.3. a statement of the remedial action sought by the initiating party;
5.1.4. a brief statement of the specific facts, circumstances and legal argument supporting the position of the initiating party.
5.2. Meet and Confer.
Within sixty (60) calendar days of receipt of a Notice provided pursuant to section 5.1, Claimants and 7-Eleven shall informally meet and confer and attempt to resolve the issues raised in the Notice.
5.2.1. 7-Eleven shall have a reasonable time to cure and undertake any remedial action once agreed upon.
5.3. Submission to Binding Arbitration.
5.3.1. If the matters raised in a Notice provided pursuant to section 5.1 herein are not resolved within sixty (60) days of the initial meet and confer required by section 5.2, either party may submit the unresolved matters to binding arbitration as set forth herein.
5.3.2. Arbitration shall be held before a single arbitrator in good standing of JAMS provided that s/he is available to schedule a hearing on the matter within sixty (60) days of the submission to binding arbitration and to render a written decision on the matter within sixty (60) days of the first hearing date. Either party may conduct discovery relevant to the disputed issue, in accordance with JAMS’ rules.
5.3.3. Law Governing Interpretation and Application of Agreement. The terms of this Agreement, and the provisions thereof, shall be interpreted and applied pursuant to California law.

6. Notice or Communication to Parties.

Any notice or communication required or permitted to be given to the parties hereunder shall be given in writing by facsimile or email and United States mail, addressed as follows:

No modification of the Full Agreement shall be effective unless in writing and signed by authorized representatives of all Parties.

The Parties will issue a joint press release on a mutually agreed upon date within thirty days after the beginning of the roll-out described in Section 3.2, above. If the parties cannot agree on a press release, any party may issue its own release provided the release is consistent with this Agreement and distributed to all parties at least forty-eight hours prior to release.

10. Full Agreement Has Been Read.

12. Agreement Binding on Assigns and Successors.

The Full Agreement shall bind any assigns and successors of the Parties. Counsel shall be notified in writing within thirty (30) days of the existence, name, address and telephone number of any assigns or successors of 7-Eleven.

The performance of 7-Eleven under this Agreement shall be excused during the period and to the extent that such performance is rendered impossible, impracticable or unduly burdensome due to acts of God; riots; civil commotions; wars; hostilities between nations; acts of terrorism; government laws, orders or regulations; actions by the government or any agency thereof; storms; fires; strikes or lockouts; unavailability of technology or parts, equipment or materials through normal supply sources; or any other contingencies beyond the reasonable control of 7-Eleven. If 7-Eleven seeks to invoke this Section, it shall notify the Claimants in writing as soon as reasonably possible, specifying the particular action that could not be performed and the specific reason for the non-performance. The Claimants and 7-Eleven will thereafter meet and confer regarding an alternative schedule for completion of the action that could not be performed, or an alternative action. Any dispute regarding the applicability of this Section, or any future action to be taken, that remains after the meet and confer process will be handled as a dispute pursuant to Section 5 of this Agreement.

14. No Admission of Liability.

In entering into the Full Agreement, 7-Eleven does not admit, and specifically denies, that it has violated or failed to comply with any Access Laws.