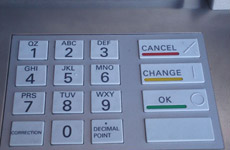 Salt Lake City, Utah (January 16, 2002) — Wells Fargo & Company and the Utah Council of the Blind announced today that Wells Fargo Talking ATMs are now up and running at approximately 58 locations across the state. A rollout of Automated Teller Machines (ATMs) with audio capability will continue through 2002 in Utah.

Through voice instruction, the new Talking ATMs tell users who cannot read information on an ATM screen how to deposit money, withdraw cash, transfer funds and buy stamps. In addition, customers can use the new Talking ATMs to hear account balances for primary checking, savings and market rate accounts. To protect the privacy and security of blind and low vision users, the Talking ATMs deliver voice information privately through audio jacks and earphones.

Customers can identify a Talking ATM by the audio decal on the front of the machine and the earphone decal near the earphone jack. Both of these decals are in large print and Braille.

Customers can find the Talking ATM nearest to them by calling (800) 869-3557 or by visiting www.wellsfargo.com and clicking on the Talking ATM Locator link at the bottom of the screen.

Wells Fargo’s efforts in Utah were aided by the Utah Council of the Blind (UCB). “We are thrilled that blind and visually impaired people in Utah will now have access to this basic financial service,” said Terri Lynne Pomeroy, UCB Board member. “We commend Wells Fargo for its significant commitment announced today and urge other banks to follow in its footsteps.”

Lainey Feingold and Linda Dardarian, two California lawyers who have assisted members of the blindness community nationally on this issue, also applauded Wells Fargos efforts. “We congratulate Wells Fargo for its pioneering approach and innovation in providing Talking ATMs that benefit both the blindness community and all people in Utah who have difficulty reading the ATM screen,” said Feingold.

We are committed to serving all of our customers and are delighted to be offering this enhanced ATM access to better meet the needs of blind or low vision Utahns, said Robert A. Hatch, Wells Fargo President & CEO for Utah & Southwest Wyoming. “We were the first in the country to draw up a plan for developing and installing Talking ATMs, and we are pleased that Talking ATMs are now available in Utah.

Wells Fargo is a diversified financial services company with $308 billion in assets, providing banking, insurance, investments, mortgage and consumer finance from about 5,400 stores and the Internet (http://www.wellsfargo.com) across North America and elsewhere internationally. In Utah, Wells Fargo has more than 150 banking locations and nearly 4,000 team members.