This is a pre-opening day update about accessibility improvements to mlb.com and the 2010 audio and video players. This information will be updated on this site and on Brian Charlson’s website. MLB has been working very hard to ensure that this year’s video and audio players are accessible, and the ACB MLB accessibility group has been working closely with them in this effort. One thing we have learned in the process is that changes to the whole site — not just accessibility — are being made up to the very last moment. Read more… MLB.Com: Gearing up for Opening Day Accessibility 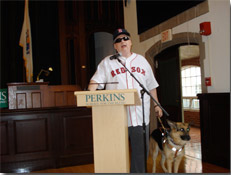 Blind Sox Fan Gets MLB to Even Game Like any true Red Sox fan, Brian Charlson attends as many games as possible and listens to the rest, play by play, on the radio. But when it came to reading stats, his blindness sometimes got in the way. Not any longer. At the urging of Charlson and fellow advocates, Major League Baseball rolled out a series of accessibility features this week on all league and team websites aimed at making statistics, ticketing, and other information fully accessible to the visually impaired. “It’s exciting that MLB has joined with us in this effort, hearing what the blindness community needs to take full advantage of this wonderful thing that is baseball. They are setting the stage for other sports to do likewise. Next season I’ll be asking the NFL, and I’ll say, ‘See what MLB can do? You don’t want to be outshined by the MLB.’” Read more… Boston Globe Story about Brian Charlson and MLB.com Access Improvements
Web more accessible to those with disabilities (article appearing on page 1 of the San Francisco Chronicle on January 1, 2010, by staff writer Alejandro Martínez-Cabrera) San Francisco, CA (January 1, 2010)– During her high school years, Lisamaria Martinez, who has been visually impaired since she was 5, carried a 25-pound backpack to school crammed with books written in Braille. But once she was introduced to the Web at UC Berkeley, she started getting professors’ class notes by e-mail, using text-to-speech software, and trading heavy Braille tomes for a few words and a click on a search engine. Read more… Web Accessibility Press Coverage on New Year’s Day
Congratulations to New York State Attorney General Andrew M. Cuomo’s office for its announcement this week of a comprehensive accessibility settlement with HSBC Card Services. Read the NY AG’s press release. The settlement, negotiated by attorney Jeffrey Powell in the Bureau of Consumer Frauds and Protection, addresses web accessibility, alternative formats for visually impaired customers, relay service for deaf and hearing impaired customers, and other important accessiblity issues. Under the Agreement, the HSBC web site will satisfy Conformance level AA of the Web Content Accessibility Guidelines (WCAG) 2.0, promulgated by the Web Accessibility Initiative (WAI) of the World Wide Web Consortium (w3c) no later than May 31, 2010. Read more… New York A.G. Announces Comprehensive Web Access Settlement
On December 11, 2008, the World Wide Web Consortium announced new standards for accessible web content. The Web Content Accessibility Guidelines (WCAG) 2.0 were finalized after years of development and input from web designers, site owners, members of the disability community, WAI staff and volunteers, and countless others with a commitment to making the internet available to all users. Resources about the revised guidelines are provided at the end of this post. Read more… New Web Accessibility Standards (WCAG 2.0) Finalized 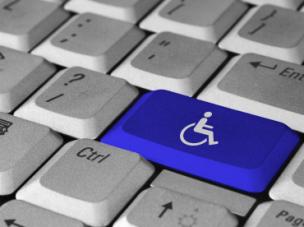 The Law Office of Lainey Feingold is pleased to announce that this web site has been included in the web accessibility implementation report issued as part of the Web Content Accessibility Guidelines (WCAG) 2.0 implementation process. The process is an international, multi-year effort to revise the accessibility standards for web sites. Details of the current status of the implementation process are at the end of this post. Read more… Web Accessibility Report includes Lainey Feingold’s Law Office Web Site
In September 2000 the following article by reporter Judy Heim, published in PC World Magazine, mentioned the role of Structured Negotiations in making banking websites accessible. Read more… PC World Article about Web Access and Structured Negotiations