The United States Access Board has announced that it will (finally) publish proposed Public Rights-of-Way Guidelines on July 26 – the 21st anniversary of the Americans with Disabilities Act. The guidelines will address access to sidewalks and streets by people with disabilities, including accessible pedestrian signals, crosswalks, roundabouts, curb ramps, street furnishings, parking, and other components of public rights-of-way. Technical specifications on these issues will be welcomed, but it is important to remember that the Americans with Disabilities Act has required such access for more than twenty years. Read more… Proposed Public Rights-of-Way Guidelines (Finally) Coming July 26

The United States Department of Justice is now taking claims from individuals with disabilities who believe that they have been discriminated against by Wells Fargo or Wachovia because of their disability. Claims must be filed by January 29, 2012. In this post you can find resources regarding the claims filing process, and learn more about the issues affecting people with visual impairments that may give rise to a claim. Under the settlement, individuals with disabilities may file claims for monetary payment based on Americans with Disabilities Act violations by Wells Fargo and Wachovia. The amount of payment each person can receive is not specified, but there is a total pot of up to 16 million dollars. Read more… Wells Fargo and Department of Justice: Claims Filing Information for the Blind Community 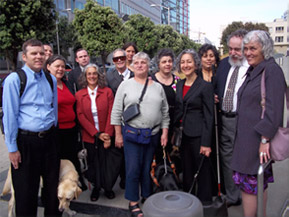 At 9:30 in the morning on July 22, a courtroom in the federal building in San Francisco was filled with blind and visually impaired individuals. They had gathered to hear arguments about whether the accessibility case against JetBlue Airways should be thrown out of court. Judge Joseph Spero asked thoughtful questions and listened carefully to arguments on both sides of the case. He is expected to issue his ruling within the next ninety days. The lawsuit alleges that JetBlue has violated California law by maintaining a website and operating airport check-in kiosks that are inaccessible to individuals with visual impairments. Read more… Blind Community Packs Courtroom for JetBlue’s Motion to Dismiss State Law Access Case

July 26 marks the 21st anniversary of the Americans with Disabilities Act – the comprehensive civil rights law designed to ensure the full integration of people with disabilities into all aspects of American life. Has the law fulfilled its promise to this country’s disabled citizens? Yes and No. Unfortunately, there are still many ways in which the promise of the ADA remains unfulfilled. Many of us will be writing ADA anniversary pieces today, and most of those pieces will have a list of things — too many things — that are still left to do. Here is my list of where the ADA has fallen short. But first, some ADA achievements to celebrate. Read more… ADA Turns 21 – Still Work to be Done