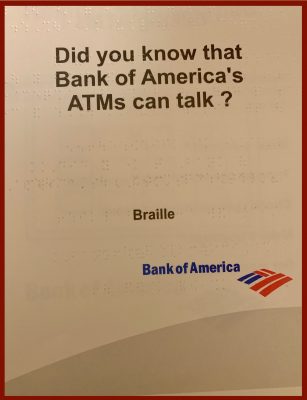 Twenty years ago this week (on March 14, 2000) Bank of America became the first company in the United States to sign an agreement to make its website accessible to people with disabilities. The agreement referenced the Web Content Accessibility Guidelines (WCAG) 1.0 at a time when the standard was less than one year old. (WCAG had its own 20th anniversary on May 5 2019.)

Bank of America’s historic commitment was the result of a Structured Negotiation between the bank and the California Council of the Blind (CCB) and five blind bank customers: Don Brown, Nicaise Dogbo, Bernice Kandarian, Jerry Kuns, and Roger Peterson.

The agreement and the negotiations leading up to it (no lawsuit needed!) created a strong foundation for the bank’s continuing leadership role in digital accessibility. And it began a twenty-year relationship between the bank and the blind community that reflects the power of collaboration in resolving disability rights claims.

Bank of America’s lawyer Brian Frumkin is one of the (many) reasons the bank has maintained its accessibility leadership role over the year. Here’s what he has to say about the 20th anniversary of the country’s first web accessibility agreement:

Bank of America is proud of its leadership in making banking services accessible to blind and visually-impaired customers. Through our collaboration with the blind community and our partnership with their advocates, such as Lainey Feingold, we have achieved amazing advancements in accessibility during the past 20 years.

Today, our ATMs, online banking and mobile app allow all customers, including customers with disabilities, to perform basic banking services, such as deposits and withdrawals, but also to transfer money, pay bills, apply for a loan or credit card and even talk with Erica, our artificial intelligence solution. We look forward to continued collaboration in the future to help improve the financial lives of all our customers.Brian Frumkin, Associate General Counsel at Bank of America

The web? What’s that? Early Structured Negotiation with Bank of America

Linda Dardarian and I were the lawyers for the blind customers and the CCB in the first web accessibility negotiations. But when we started our discussions with the bank, we had never heard of website accessibility. Or even of online banking.

As I describe in more detail in my Structured Negotiation book, the organization and individuals had come to us in 1994 for help in solving the problem of ATMs that blind people couldn’t independently use. In 1995 we began working with Bank of America on the issue of Talking ATMs and by 1998 progress towards independently usable ATMs was going well.

Sometime that year though, our clients told us about another technology — online banking. As early technology adopters, several of the Bank of America Talking ATM blind advocates had rigged up systems to communicate with the bank electronically — through modems, telephones, and braille displays. These advocates, including Jerry Kuns and Roger Peterson, taught me about online banking and, more importantly, about the need for it to be accessible.

What I learned was the seed that grew into my work for the past twenty plus years.

Based on our clients’ advocacy, we went to the bank and explained why accessibility of its online banking system was so important. As with our Talking ATM work, accessible online banking was key to independence, privacy and security of blind customers.

Because of the strong relationship that had been forged between the bank and its blind customers during the Structured Negotiation, there was no pushback. We began working with the bank — really learning together — to ensure that its online banking was available to everyone.

That work is what culminated in the country’s very first web accessibility agreement. (Which was really a Talking ATM – braille bank statement – web accessibility agreement.) Truthfully, we paid more attention to the Talking ATMs part, and after the landmark agreement the bank did significant work educating the blind community about the new technology An image of one of its early braille marketing and education documents from my archives appears in this post.

I don’t think we quite realized then how important the web accessibility part of the agreement would come to be.

Here’s the web accessibility language we agreed to as part of what we called the Bank of America California and Florida Agreement. It was so named because in addition to referencing WCAG 1.0, the bank agreed to initially install Talking ATMs in those two states. Later we had agreements for Talking ATMs in all 50 states (see resources below).

The “mutually agreed upon consultant” was Shawn Henry, who at the time was an independent web accessibility consultant. In Structured Negotiation everyone around the table agrees on joint experts — instead of expensive fighting competing experts. Shawn set a high bar for all experts who came after!

Here’s a gift I would like in celebration of the 20th anniversary of the first web accessibility agreement in the United States:

Please. Everyone. Stop saying web accessibility is something new. Stop saying you don’t know what it is or how to do it. Or that there aren’t any standards or best practices in design, development, training and more.

WCAG is 20 years old. Site owners have been using it for 20 years. It’s long past time for everyone to follow the lead of Bank of America and other champions and make the digital world available to everyone.

This post celebrates the 20th anniversary of the very first web accessibility agreement in the United States. The agreement was signed by Bank of America, the California Council of the Blind and six blind bank customers. The bank agreed to make its online banking system would work for disabled customers. The standard was the Web Content Accessibility Guidelines (WCAG) 1.0. WCAG 1.0 began in May 1999. The bank also installed Talking ATMs blind people could use without help. It also gave bank statements in braille. There was no lawsuit filed against the bank. Instead of fighting, lawyers used Structured Negotiation. That is a method that helps people solve problems with cooperation. Lainey Feingold and Linda Dardarian were lawyers for the blind community in this process. Bank of America is still a leader in accessible services. Back to top